Far from Malaysia's booming peninsular, in the remote eastern province of Sabah, the city of Kota Kinabalu is becoming one of Asia's tourist hotspots. Kota Kinabalu, called KK by most locals, has lots of interesting sites, most notably its world class diving with many top dive spots. Presumably in the year 2008 an other attraction will be finished - Aquatica.

Aquatica will become a large pubic aquarium and ocean discovery center. Once opened, Aquatica will send you on a voyage of Bornean discovery, walking you through the wonders of the water cycle: through limestone caves, dense jungle, muddy mangroves, spectacular reefs and beyond the coastlines, out into the open ocean where you can come face to face with the ultimate underwater predator.

The aquarium not only aims for tourists visiting the area, but also educate locals about the natural beauty of their habitat. Fish bombing is still common in this area, which can easily be observed while diving along many reefs along the coast.

Prof. Steve Oakley, marine biologist and long term expert of the area, is the person who is making Aquatica happen. Hydrosight was fortunate to meet him in person when we checked on the large acrylic aquarium windows we provided in August 2007. The windows will be used for Aquatica´s shark tank.

Prof. Oakley was pleased with the low budget - but high quality windows. While remaining his budget he could redesign his tanks for the larger windows. Hydrosight wishes success with ongoing installation. 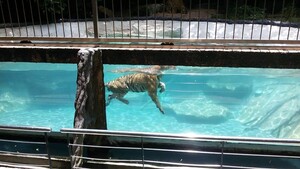 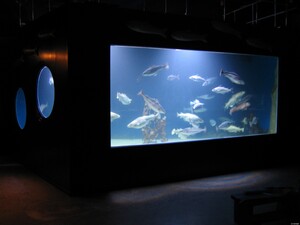